There's no doubt that babies love to be held, touched, sung to, and kissed; and reading to babies can be an exceptionally bonding and rewarding experience. Child's Play International's Baby Gym series enables parents and other caregivers to bond with babies through reading, singing, touching, rocking, and more.

The four board books in the series all feature short songs, movements, and activities that give parents and babies the opportunity to spend quality time together. 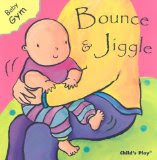 Bounce & Jiggle
Bounce & Jiggle is a book for the times when you want to really play with and excite your baby. It features five songs or chants along with ideas for movements and motions you can do with your baby while singing or chanting.

For example, one of the rhymes is "Humpty Dumpty."

"Humpty Dumpty sat on a wall, Hold baby on raised knees facing you.
Humpty Dumpty had a great fall. Slide baby down onto your stomach.
All the King's horses and all the King's men,
Couldn't put Humpty together again." Tickle baby all over.

This rhyme can also be played with baby sitting on lap.

The bottom of the page also says, "Encourage your baby to join in by clapping to the rhymes. Baby will want to copy your mouth movements when you sing." 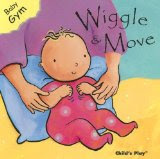 Wiggle & Move
Another book in the series, Wiggle & Move, features songs and chants that encourage babies to move. For example, my daughter's favorite is "Roly Poly:" 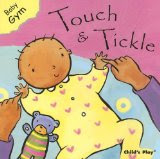 Touch & Tickle
When you want to spend some time tickling and massaging baby, Touch & Tickle offers up five songs and chants that will make your baby giggle and also provide the stimulation they need. 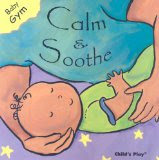 Calm & Soothe
Finally, for those quiet moments, Calm & Soothe offers five short lullabies that help babies drift off to sleep. In this book, the instructions mostly have caregivers rocking and softly swinging the baby. Lullabies include favorites such as "Hush, Little Baby," and "Twinkle Twinkle Little Star."


Child's Play International sent review copies of all four of these books just a couple of weeks ago, and they've quickly become favorites in our house. My daughter loves to hear me sing (she's probably the only person in the world who does), and she loves to imitate the movements. Sanja Rescek's colorful illustrations of cute cherub-faced babies are perfect for babies and toddlers. I also appreciate that there is diversity within the books, although the covers don't convey this. My only real complaint is that I wasn't familiar with some of the songs in the books, so I just made up my own tune. It would be great to have an accompanying CD.

Recommendation:
I highly recommend these for parents, grandparents, and caretakers of infants and toddlers, and I think they're also a great way to help older siblings bond with their younger brothers and sisters.