The Greedy Sparrow: An Armenian Tale by Lucine Kasbarian, illustrated by Maria Zaikina 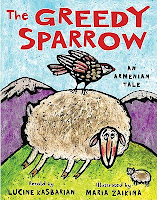 I adore folktales. I love storytelling and grew up in an area with a rich oral history. The idea of stories being passed down from generation to generation – that my children are hearing stories that other children across an ocean heard a hundred years ago is amazing. True – many are didactic – which normally turns me off in a children’s book, but folktales get a pass. It’s in their very nature to teach you some sort of lesson. Plus, the stories are often so well told and entertaining that it’s okay.

The Greedy Sparrow: An Armenian Tale is retold by author Lucine Kasbarian, whose father told the story to her at bedtime when she was young. In the book, a sparrow gets a thorn in his foot. As he’s flying through the countryside, he happens upon a woman baking bread and asks her to remove the thorn. She happily obliges and the sparrow is on his merry way. However, he soon returns and demands that the baker return his thorn. When she says she threw it in the oven, he demands that she give him a loaf of bread in return. She does, and the sparrow files away, carrying a loaf of bread. The story repeats itself as the bird flies across the Armenian countryside, asking locals to keep an eye on whatever he has and demanding something in return when the original item invariably goes missing. At one point, he even finds himself with an Armenian bride. As folktales go, the greedy sparrow eventually gets his comeuppance. This is the part where readers realize the importance of sharing, being nice to your neighbors, etc.

The story is simple, yet very entertaining. The illustrations give the book an old-fashioned feel – what you would expect to see in Armenian villages of long ago. Word bubbles appear over the bird and the people he interacts with, offering ease in readability for young readers and a bit more interaction. Humorous facial expressions on animals and humans add a nice touch.

This is definitely worth checking out.


The links in this post are affiliate links. With every purchase you make through clicking on these links, you are helping support The Well-Read Child.

The Dark and Hollow Places by Carrie Ryan 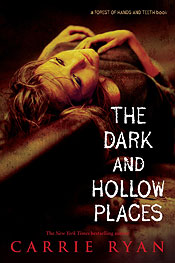 Annah is scarred - scarred from an accident that disfigured one side of her face and body; scarred by Elias's apparent abandonment three years ago; scarred by leaving her twin sister Abigail behind in the zombie-ridden Forest of Hands and Teeth when she was five years old.  She's survived on her own in the Dark City for three years, and is on her way out when she notices someone who looks just like her - except this girl has no scars and appears to walk with the confidence of someone who's led a better, even happy life. Soon, she's reunited with her sister and Elias and meets Catcher, a guy who is amazingly immune from the "Unconsecrated" who roam around in search of human flesh. Like Gabry, he's broken, and she finds herself strongly connected to him.

But life is less than happy. A massive horde of the  Unconsecrated has awoken and is feverishly invading the Dark City. The only safe place is the "Sanctuary," an island run by the recruiters, and they need Catcher to bring him supplies. The recruiters keep Annah, Elias, and her sister on the island to keep Catcher coming back, but they soon learn that zombies are not the only threat. They have to escape before it's too late, but how?


The Dark and Hollow Places is the third book in Carrie Ryan's "The Forest of Hands and Teeth" trilogy. It's fast-paced, exciting, and full of lots of gory zombie action. Oh yeah, and there's also a pretty good love story that unfolds along the way.

Of the three books, Annah is the lead female character that I like the most. She has an inner strength that she's had to rely on for a very long time, but as the story unfolds, you realize just how vulnerable she is and much of a toll a lifetime of living in fear has taken on her. Unlike the second book, which takes place about 17 years after the first one, this one picks up right after the end of the second. Yes, zombies are a central theme, but the book is smartly written and is much more about survival, growth, and learning not only to love yourself but to open your heart to others.