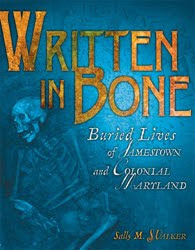 Holding a lifelong infatuation with archeology, I'm always watching shows or reading books about digs and discoveries. The quality of writing varies among the different books and programs. Sometimes it's way too technical. Other times it's boring and just presents fact after fact.

When Sally M. Walker's Written in Bone: Buried Lives of Jamestown and Colonial Maryland was nominated for a Cybils award, I was eager to check it out, and I was delighted to see that it was well-written, engaging, and full of interesting information.

Written In Bone takes readers along the journey as scientists uncover skeletons and other artifacts from Colonial Jamestown, VA and Colonial Maryland. What makes this book exceptional are the stories it tells along the way. Not only do we learn more about the actual skeletons that were uncovered, but we learn about the way of life that was often brutal and even deadly during this period. For example, indentured servants were often abused as the bones of a young boy found hastily buried in a cellar revealed. Babies were often swaddled so much that they didn't receive important vitamins from sunlight and died in early infancy as revealed from the bones of an infant discovered in a lead coffin under a Maryland church.

The book takes readers through the excavation of the different skeletons and the process involved in determining key information about who they were, where they lived, and how they died. It never gets too technical and makes for a fascinating read.

If you get a chance to visit the DC area, a visit to the American Museum of Natural History to "meet" some of the skeletons and artifacts featured in the book. I got a chance to see it before I read the book and was pleasantly surprised to read more about some of them.

I highly recommend this book and think it may even inspire some readers to explore careers in forensic anthropology.

Head on over to Chronicle of an Infant Bibliophile to leave your links and comments for this week's What My Children Are Reading.

Also, I've decided to take a brief hiatus from blogging as I prepare for the holidays, read Cybils nominees, and get ready for a new baby. I'll be on sporadically to talk about the Cybils and other Kid Lit news. Cheers!

I'm catching up on Cybils reading and hope to have new reviews to you soon. In the meantime, be sure to stop by Mouse Grows, Mouse Learns and let everyone know what your kids are reading this week!

Posted by Unknown at Thursday, November 05, 2009 No comments: