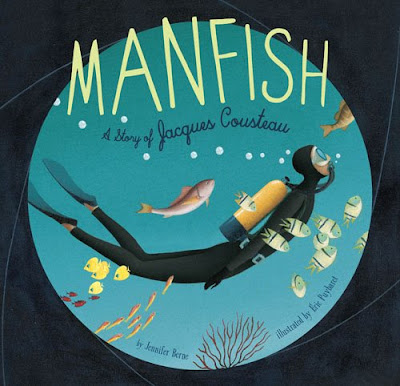 
"Bubbles rising
through the silence of the sea.
Silvery beads of breath
from a man
deep, deep down
in a strange and shimmering ocean land
of swaying plants and fantastic creatures.
A manfish
swimming, diving
into the unknown.
Exploring underwater worlds
No one had ever seen
and no one could ever have imagined."

This is how Jennifer Berne's story of Jacques Cousteau begins. The words, black and curving on a palette of dark blue/green start out large at the top of the page and get smaller and smaller as they go down the page, underneath the sea, and like fish, curve and swim toward the manfish on the next page in scuba gear at the bottom of the ocean. A sea of fish and seaweed swim around him as bubbles rise to the top of the page.

On the next page, the story begins with a young Jacques fascinated with the water and dreaming that someday he would be able to breathe under water. It tells of his fascination with machines and movies, the childhood movies he made, and how this fascination continued as he grew. Then one day a friend gave him a pair of goggles, and for the first time, he could see the magical world that was beneath the sea. The story continues by chronicling Jacques' quest to breathe underwater, his invention of the aqualung, and ultimately achieving his dream. Not only did he achieve his dream, but through his underwater films, he introduced the world to the beautiful and mysterious underwater world and helped inspire others to save the ocean's wildlife from pollution.

Through this biography, children are inspired to dream big. The author's note at the end of the book says that Jacques always said, "Il faut aller voir," roughly translated to mean, "We must go and see for ourselves," which she says is "a wonderful way to start just about anything." The book also helps children develop a respect for the earth and its creatures.

But what do I love most about this book? Eric Puybaret's magnificent, breathtaking illustrations. Rendered in acrylic paint on linen, the dark blues and greens make you feel like you're swimming in the ocean with Jacques. As he goes lower and lower into the ocean, the colors get darker and darker, a blue/black at the deepest points. My only criticism is that when the palette is dark, the black words may be a little difficult to read.

The curvy lines of Jaques body models the same curviness of the fish, making him truly look like a manfish. I could almost hear the deafening silence of the ocean, Jacques' breathing, and the bubbling sounds created from the aqualung as I read through the book.

But perhaps the most wonderful illustration is the one here, which, depicted on the screen here, actually does not do the book justice. You have to turn the book around so that it's vertical and open up a centerfold to reveal Jaques and his friends starting out at the top of the ocean and swimming down to the bottom, revealing new fish and other sea creatures along the way.

"On the bottom, they found pink ghost crabs, with eyes
on long stalks, buried so deep in the
sand they looked like a garden of
eyes. And flute fish--with heads like horses
and bodies the shape of tubes--
sticking out of rocky openings,
like pencils in a cup. "

*All images used with permission of Chronicle Books.