The next JK Rowling? 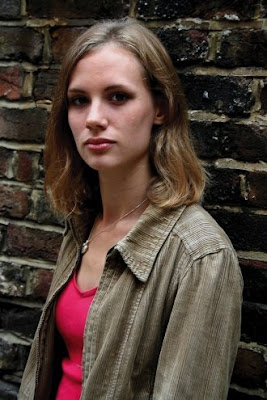 Move over JK…there’s a new kid in town, and she’s been creating quite a buzz. Nineteen year old Catherine Banner’s debut novel, The Eyes of a King , the first in a trilogy was just released. I received a review copy from the publisher a couple of weeks ago and stayed up way too late last night finishing the book. And all I have to say is “WOW WOW WOW.” I don’t remember feeling this excited about a book and such anticipation for the next in the series since, well, Harry Potter.

In a nutshell,The Eyes of a King , is the story of 15-year old Leo who lives with his grandmother and younger brother in the country of Malonia, which 10 years earlier was overtaken by the tyrant Lucien. Before the revolution, Malonia was peaceful, creativity such as writing, dancing, and singing, was encouraged, and the great magicians were revered. Now, it’s pretty much a dictatorship, a Soldier-making factory, and completely stifling. The powerful magicians, except for the evil Talitha, have been exiled or forced into hiding. Leo and his brother go to a harsh military school where they are abused by the volatile Sergeant Markey. And Leo has special powers that he must hide.

One day he finds a magical book where writing mysteriously appears. While Leo’s world is falling apart around him, he is engulfed in the story of Malonia, the revolution, a powerful relative, and two teenagers, Ryan and Anna. But is it just a story? Leo soon learns how everything weaves together to bring the old Malonia back.

The Eyes of a King is a book with mystery, suspense, love, grief, heartache, selfishness, and

selflessness. Catherine Banner’s masterful storytelling leaves no doubt that she is a force to be reckoned with in the writing industry. But is she the next JK Rowling? Both authors are British, and both write stories with a bit of magic, but I do think the comparisons stop there.

As a complete Harry Potter fan, I dare to say that Catherine Banner is better. Her book has a level of maturity and realism that Rowling was never able to achieve through Harry Potter. There are no cutesy “accio” spells, chocolate frogs, or nosebleed nougats.

And when I say realism, I’m talking about the ability to realistically convey the thoughts and feelings of teenagers. Perhaps the least favorite book in the Harry Potter series is The Order of the Phoenix. In this book, Harry is an angst-ridden teenager and a bit obnoxious, and readers didn’t like this Harry. However, I think there would have been a more positive reception if Rowling could have more effectively conveyed this and made him seem more like a real teenager. In The Eyes of a King , on the other hand, Leo is also ridden with angst and deals with some pretty emotional stuff, but his thoughts, feelings, and actions are completely believable. I identified with him, I cried with him, I felt angry with him. At one point in the book, I actually wept, and I’m not talking eyes tearing up here. I’m talking humunga-junga crocodile tears, a splotchy red face, and sobs—UGLY crying. When an author can elicit that sort of emotion from a reader, you know she’s done something right.

But let’s look at it this way…Rowling and Banner have obviously different stories and different audiences, which makes comparing the two a little obsolete. The protagonist in The Eyes of a King is 15 years old, so already we’re starting with an older readership here. Harry had just turned 11 in the first book—a HUGE age difference. Ten year olds probably won’t like The Eyes of a King as much as Harry Potter, and teenagers will probably like The Eyes of a King more. So, do I think Catherine Banner is the next JK Rowling? Absolutely not. Is she a better writer? Yes. Will she achieve the fame and fortune of JK Rowling? It’s hard to say—the Harry Potter phenomena was huge.

One thing is for sure…she has earned my deepest respect, and I can’t wait until the next book in the trilogy comes out.

Read an excerpt from the book

Information about The Eyes of a King