No! That's Wrong! by Zhaohua Ji and Cui Xu 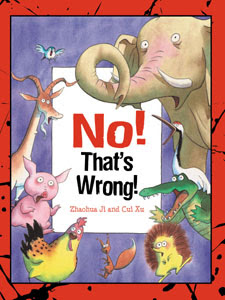 by Zhaohua Ji and Cui Xu.

Oh my...Kane/Miller has brought us a delightful book from China!

A pair of ruffly red underpants blows off a clothes line and lands near a little white rabbit who immediately places them on his head. "It's a hat," he says. The text at bottom corrects him, "No, that's wrong. It's not a hat." But the rabbit doesn't seem to listen and goes about placing the underpants on the heads of other animals. It takes a donkey to set him straight and let him know he's wearing underpants on his head.

But, if the donkey is right, and they really ARE underpants, where does his tail go?

Along the way, the story introduces a number of adjectives and opposites. For example, the "hat" is too small for an elephant, but too big for a fox, and it's simply amazing, magnificent, incredible...you get the drift.

I really can't think of anything that's much funnier than a bunch of animals with hilarious facial expressions wearing underpants on their heads, and children will laugh out loud at this book and its illustrations. I can just imagine them yelling, "No! That's Wrong," as they turn the pages. Even the back end papers will elicit giggles as readers see a number of animals incorrectly wearing articles of clothing and other objects on their bodies.

If you're looking for a funny book that will make your child (and you) laugh and also introduce some new vocabulary words along the way, this would make an excellent choice.