The Zoo I Drew by Todd H. Doodler 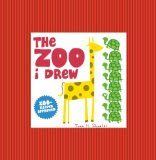 There are about a gazillion alphabet books out there. In fact, a recent post at Editorial Anonymous titled "Death by Alphabet Books" goes as far to proclaim that most children don't learn the alphabet from a book, but by good old pen and paper. I tend to agree, and I do think that there are too many out there that just don't work. However, although not perfect, I do like Todd H. Doodler's The Zoo I Drew, and let me tell you why.

The book is supposedly from the point of view of a two year old who visits the zoo with his/her parents and draws pictures of the animal he/she sees. The colorful illustrations are not pretentious or overdone. It's obvious that an adult drew them, but you COULD believe that a very talented child (definitely not a two-year old though) drew them. I also like the fact that my own two-year old can recognize most of the animals in the book. In an attempt to be unique, a lot of alphabet books feature obscure animals, and while I'm a fan of introducing kids to new vocabulary, I do think that there needs to be a bit of familiarity with the content, or they won't want to read it again, especially younger children.

I also love the fact that there is no replacement for X in the alphabet like an Ox or a Xylophone. Instead, the book says, "I couldn't find an animal for X, so instead I grabbed a quick snack. When I returned, I went looking for Y, and that's when I found the Yak."

So, here's why it's not perfect. The book presents some basic, yet interesting facts about the animals featured, but most of the rhymes just do not work. I admittedly have a disdain for rhyming picture books because there are very few that actually work and flow well enough to read aloud without stumbling. Take this one about the newt for instance, "The newt is small and slimy, it's a type of salamander. It lives on the forest floor, where it's easier to meander."

This leads me to my next point...can you imagine a two-year-old saying this? Not at all, so why is the book told from the point of view of a two-year-old? Why not an older child?

But here's the real test. My two-year-old LOVES this book and asks me to read it again and again. She enjoys the illustrations and feels so proud when she can identify the animals. It would definitely have worked better if it didn't try to rhyme, but if you have a higher tolerance for icky rhyming than me, check it out.