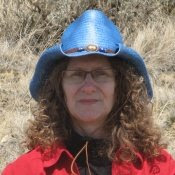 Linda Aksomitis is the author of fiction and nonfiction adult books, crossover books, and children's books. Her newest book, Longhorns and Outlaws follows twelve-year old Lucas who is on a cattle drive in the Old West. Lucas's story is filled with adventure and challenges as he tries to make a living as a cowboy after the tragic death of his parents. As part of her virtual tour for the book, Linda answered a few questions about the book, her writing, and reading with kids.

Longhorns and Outlaws is set in the Old West, and as I was reading it, I felt as if I was being transported back to that time period. What kind of research did you have to conduct in order to so effectively tell Lucas's story?

In many ways, I think I've been researching this book since I was born! Certainly, my experiences riding horses as a child/teen had a big impact on how I was able to tell Lucas's story. Also, since the farm I lived on up until my second year of school had no power, or running water or sewer, or even much of a road, I always draw from those early experiences for my historical fiction. Then of course, there were the many trips through Montana and Saskatchewan's Big Muddy to get a feel for the country, visit museums, and talk to people, that really helped me enrich the story with details. I also did a lot of "paper" research, reading a lot of first person memoirs, newspapers of the time, and historical information. In the end, when I had questions that were tough to answer or facts to check, I went to the ranchers and cowboys I know for answers.

The story begins after Lucas tragically loses his parents, and he sets out on a great adventure. Throughout the history of children's literature, some of the most popular, beloved, and memorable characters are orphans. What do you think is so appealing about these characters?

Interesting question! As a writer, I wanted an historical story today's kids could relate to, which is why I chose the aftermath of the 1900 Galveston Hurricane, which took more lives than Hurricane Katrina. I hoped young readers would be able to parallel Lucas's experiences to those of modern young people who lost their homes and families in that catastrophic event. For young readers, I think stories about orphans have a strong appeal because the reader knows there aren't going to be any parents show up to provide a solution or bail out the main character. Instead, the main character is going to have to cope on his own, something readers this age are striving to learn how to do.

How long did it take you to write the book?

A story has to live in my head for a long time before I even start to make the initial outline, so the ideas for Longhorns were decades old. I loved staying up watching old westerns with my dad as a child, and always knew I'd like to jump back in time and adventure there myself as a writer. In physical time, I worked on it for three years. The first draft was one during which I focused on recalling all those "horsey" experiences that were thirty-some odds years behind in my past. The second draft was after a couple of intensive research trips through Montana and the Big Muddy, so it focused on geography and nature. That was the draft my publisher, Coteau Books, accepted. So, the third draft ran with some ideas from the children's editor at Coteau, Barbara Sapergia, and thanks to the ever-increasing wealth of knowledge and historical archives of newspaper on the Internet, was where I worked in all of Lucas's backstory about Nederland and the 1900 Galveston Hurricane. My fourth edit was the final one, with Laura Peetoom. This was where I discovered Ebenezer, Chief Joseph's appaloosa (the horse had always been an appaloosa, but was originally a mare named Full Moon), and made Eb come more to life, and was also the point where I really focused on language, strengthened the cowboy lingo, and created the glossary.

What is your favorite part of the writing process (researching, writing, editing, etc.)

I love the research for my writing, particularly the travel I do, since I'm a setting driven writer (as opposed to character or plot). And, as a librarian, I'm an enthusiastic researcher in other areas, so I always make it a priority to find out the tiny details that will help a reader feel like he or she has really spent some time in the past. With the writing itself, I enjoy the editing and enriching the story with each subsequent draft. Sometimes it's hard to stop editing!

You've written both fiction and nonfiction. Do you prefer one genre over the other?

My lifelong dream has always been to be a fiction writer. Somewhere along the way I realized that nonfiction writing was not only interesting and challenging too, but could also be used to springboard into my fiction. Currently, I have two focuses with my writing career, children's fiction and travel writing.

Parents often ask how they can help turn their reluctant readers into lifelong readers. As both a mother and teacher, do you have any suggestions?

I have three sons, two of whom loved books and have read voraciously all along. The middle one, however, was not so fond of reading by himself, which I found frustrating as a parent and his school librarian. I tried all the usual reluctant reader ideas to get him hooked on books, only to discover, quite by accident, that the reason he didn't read was that what I'd been recommending didn't have enough layers of meaning to really engage him. One day when I was reading The Ghost of Thomas Kemp (by Penelope Lively) and couldn't keep from laughing out loud, he picked up the book when I set it down to make supper. From there he devoured all of the British YA fiction I could find (he was in fifth grade), and never looked back. My advice, as a parent, teacher, and librarian, is to show young readers by example that books are fun and that there really is a book for every reluctant reader. When he finds the right one, he'll let you know!

What were some of the books you read with your sons when they were growing up?

I've been exceedingly lucky in my reading, as those two sons with unlimited appetites for reading have led me through some exceptionally interesting books in pretty well every genre, although fantasy, science fiction, and techno thrillers are the most popular for all of us. Some of our early favorites have been Anne McCaffrey, the Chronicles of Narnia, the Wizard of Oz, and many, many more! That middle son has led me down a different path -- his first "love" was Professor Wormbog in Search for the Zipperump-a-Zoo by Mercer Mayer, which he brought home every second library day for a year or two, since he had to return it on the opposite library days.

Do you get the opportunity to read with your grandson, and if so, what are some of your favorite books to read together?

Yes, I've been very lucky to have my grandson for Friday night sleepovers since he was born, so we've shared a lot of books over the years. One of his first favorites was by a friend of mine, Dianne Young -- The Abeleda Voluntary Firehouse Band. When his parents had read it to him for the thousandth time (his dad was my middle son) they brought the book to stay at Grandma's house, where we read it over and over and over again on Friday nights. He's also reading Narnia these days, along with my collection of Artemis Fowl books.

Can you give us a sneak peek into the sequel to Longhorns and Outlaws? Just by looking at the title, Kidnapped by Outlaws, it looks like it will be exciting!

Of course you'll have guessed someone gets kidnapped and that someone is Lucas! In Kidnapped by Outlaws, Lucas ends up in the outlaw hideout handcuffed to a young would-be outlaw trying to get accepted by the gang. The story is about the need for friendship and belonging, and deciding how far we'll go to achieve those needs.

In addition to Kidnapped by Outlaws, what other projects are you working on?

My next big project is another historical novel, this time for a little older readers. My husband and I are going to Hungary for a week to do some background research for the main characters -- my dad is Hungarian, so I want to explore my Hungarian roots a little more in depth.

That sounds like a wonderful trip! Best of luck, and thank you so much for taking the time to talk to us!

Thanks Jill! It's been marvelous working with you on the Virtual Tour for Longhorns and Outlaws.