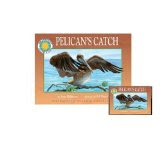 A brown pelican is 11 weeks old and has just learned to fly. Now she must learn to fish and feed herself. She joins a flock of pelicans flying out to sea to fish.

This title is a nice introduction to science books for younger children. The pelican is not given a name or internal dialogue as if it were talking to itself. This helps to set the book apart from children's fiction which often uses animals for main characters who act and think like people. Brown Pelican's behaviors are described in a story format which is approachable and interesting to read. It takes many tries for the pelican to catch a fish and keep it from hungry gulls, who like to steal the catch by standing on a pelican's head when it comes up for air. (Seagulls are so bad).

The illustrations are beautiful and clear. The pelican is prominently featured in the pages as she goes about learning to fish. She is also quite large on the page which speaks to the actual large size of the bird. There is a lot of movement as you travel with the flock of pelicans through the sky and into the waves and sea. The text and illustrations reflect each other very well which is key in nonfiction for young children, meaning the text matches the action in the illustrations.

I liked this book a lot, and there is more information in a note at the end for parents, caregivers and teachers about brown pelicans. I learned a little about brown pelicans, and I also cared about what happened to the pelican in the story which makes for a good book.

This title is timely, too as California is seeing adult pelicans dying and dead on its coastlines this new year.
(Don't worry this title has a happy ending.)