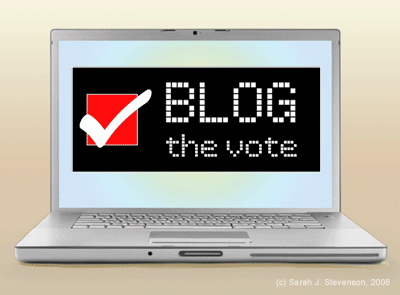 I've made a deliberate choice to stay away from politics on this blog. While I have strong political convictions, my intent is for this blog to welcome every person who cares about reading to kids and developing literacy regardless of their political persuasion or any other persuasion for that fact.

So, when I read about the Blog the Vote effort organized by kidlitosphere bloggers, Lee Wind , Gregory K, and Colleen Mondor, I had to think long and hard about what I would say to keep the blog neutral. I think I have it.

This is why voting is important to me, and why, if you're eligible to vote, you should go out to the polls on Tuesday.


I don't care whether you're Republican, Democrat, Independent, or even who you're voting for as long as you do it. If you have children, I encourage you to take them to the polls on Tuesday, to talk to them about the importance of voting, and to witness a crucial part of the democratic process first hand.


Visit all of the other Blog the Vote posts and even submit your own at Chasing Ray.