Continuing with this week's theme of nonfiction children's books for classrooms, today, I'm bringing you a biography of a hero about whom I'd never heard until I read Betsy Bird's review at Fuse #8. So, when I saw this book sitting on the "new nonfiction for kids" shelf at my library last week, I immediately picked it up.

The book tells the story of Robert Smalls, who was born a slave in 1839 on a South Carolina plantation. All his life, he dreamed of freedom. When his daughter, Elizabeth was born in 1858, he worked out a deal with his master to buy his wife's and daughter's freedom for $800 even though he would remain a slave. It would take a long time, but when the Civil War begins and Robert becomes a wheelman on a Confederate steamer, he devises a plan to escape, knowing that if he's caught, he, his entire family, and every other slave on the steamer would be killed. The rest of the book focuses on Smalls' daring escape that will leave readers on the edge of their seats. The back of the book includes an afterword with more information about Smalls, including a photograph, as well as a list of sources.

I really love Lee & Low's books because they choose to publish books that tell the stories of virtually unknown heroes and role models. I've been impressed with every one of their biographies that I've read: A Song for Cambodia (my review), Louis Sockalexis: Native American Baseball Pioneer (my review), Hiromi's Hands (my review), Surfer of the Century: The Life of Duke Kahanamoku (my review).


Seven Miles to Freedom: The Robert Smalls Story is no exception. From the moment I opened the book, I was drawn into Smalls' story, and by the time, I got to the escape, I was tense and nervous and almost afraid to turn the page. What if he got caught? What if his wife and children were killed?

On my first read, I was so entranced with the story that I didn't even look at Duane Smith's oil paint impressionistic illustrations, and as I looked at the book a second time, I have to say that they really aren't my favorite. Don't get me wrong. They're not bad; it's just that I couldn't really tell what the story was about by just looking at the illustrations. They merely accompanied the story rather than tell it. 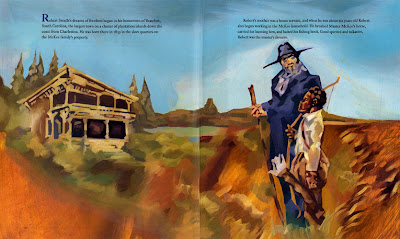 That aside, the story is fascinating, and I think children will truly admire Robert Smalls' courage and tenacity. They'll also appreciate learning about a Civil War hero they may have never heard of, and I'm sure teachers will also find this refreshing.


More info:
You can also purchase this book and all others mentioned in this post directly from
Lee & Low's website.

What Other Bloggers are Saying:
Fuse #8: "As it happens, the story of Smalls' escape and bravery is particularly ideal for a picture book. There's danger and suspense and a clear-cut hero involved. Now all that remains is for someone to write a full-length biography of the man for kids." (read more...)

It's NONFICTION MONDAY!!!! Get more nonfiction choices at Picture Book of the Day.