The Scrambled States of America Talent Show by Laurie Keller 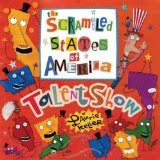 The Scrambled States of America Talent Show by Laurie Keller

Oh my...Laurie Keller is one funny lady, and she's back with The Scrambled States of America. This time, the crazy states are putting on a talent show.

Who knew geography could be so fun?

The book lures readers in from the very beginning:


"It all started simply, really.
In the middle of the night,
New York woke up from a dream and shouted,
HEY,
EVERYONE--
LET'S
HAVE
A TALENT
SHOW! "

You flip the page, and all of the states are donning top hots and dancing "Fred Astaire," style. The rest of the book covers all of the preparation and practice that leads up to the big show itself. Indiana is the director, Arizona is the costume designer, and Washington D.C. is the emcee. Georgia has a severe case of stage fright, and Dr. Globe has to perform a number of tests, including performing x-rays of her counties and cities, to make the diagnosis. His "prescription" will make kids chuckle.

The talent itself is varied. Some is predictable (Kentucky plays the banjo, and Pennsylvania plays the liberty bell), and some is downright hilarious. "Minnesota the Magnificent" saws South Dakota in half. The boy-band, the New States on the Block (New York, New Jersey, etc.) wow the ladies with their charm. Iowa, who looks like Rodney Dangerfield, tells some "corny" jokes. I could go on and on.

Along with the funny text, there is commentary among the states. For example, when the New States on the Block are performing, Missouri, who is in the crowd exclaims, "He's pointing at ME" while Colorado rolls his eyes and says, "Oh, brother." Very very funny. Keller's illustrations are just as hilarious as the text, and I find something new and funny each time I look at the book.

The end papers include two charts, one with statehood dates and the other with state abbreviations. Scattered all around the charts are various states commenting and asking questions.

This book is an excellent way for kids to have fun learning about the different states, and it's perfect as a read aloud. Actually, you HAVE to read it aloud. The first time I read it, I read it to myself, and it was funny. But the second time, I read it aloud, and I cracked myself up. I especially had fun using a Georgia drawl.

I highly highly recommend this book.