I See a Kookaburra! by Steve Jenkins and Robin Page 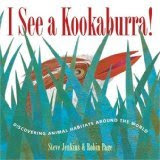 I See a Kookaburra!: Discovering Animal Habitats Around the World by Steve Jenkins and Robin Page (Houghton Mifflin, 2005)

Parents, teachers, and homeschool parents, here is a great resource for animal lovers and for lessons covering geography, ecosystems, species, habitats, colors, adjectives, and much much more. The superstar husband and wife team, Steve Jenkins and Robin Page, introduce children to interesting information about animals and their habitats around the world in a very fun hide-and-seek format.

The book covers animals in six different habitats:
Jenkins and Page introduce each habitat with a spread of eight animals hiding in the flora of the habitat illustrated with Jenkins' familiar cut and torn paper collages.

For example, on the page that covers the desert, we see a kit fox's nose and ears hiding behind a cactus, the rattle of a diamondback rattlesnake poking up behind a rock, the legs and eyes of a trapdoor spider peeking out of its tunnel in the ground, and more. Here, the only text on the page is, "In the desert I see... This desert is in the American Southwest.

When you flip the page, all of the flora has disappeared, and you see where all eight animals were hiding on the previous page. Beside each animal is a short passage that completes the "In the desert I see..." sentence. For example, "...a sharp-eyed kit fox leaving its burrow," "...an angry diamondback rattlesnake buzzing a warning," "...a trapdoor spider waiting patiently in its tunnel."

As an added surprise, somewhere in each habitat is an ant because as the authors explain in the book's introduction, "they live almost everywhere on earth."

The back of the book includes a longer paragraph about each animal featured in the book and more information about the habitat in which they live.

I'm a huge fan of Page and Jenkins because they really do make nonfiction and learning fun, and I See a Kookaburra!: Discovering Animal Habitats Around the World is no exception. The interactive hide-and-seek element engages children and encourages them to turn the page and find out where the animals are hiding. Without even realizing it, they're learning and having fun at the same time.

While some of the critics have said that the disproportionate sizes of the animals may confuse kids, I think kids are smart enough to see that these are just depictions of animals. They know that a jaguar is bigger than an iguana and won't mind that the animals are not drawn to scale. I often think adults don't give kids enough credit when I see comments like these.

As I mentioned earlier, the teaching possibilities are endless and can be used across curricula. If you're looking for interesting and engaging nonfiction, you can't go wrong with Jenkins and Page.

Fossil Hill Book Blog: "This dynamic, captivating book encourages critical thinking and influences readers to take a closer look at the world around them." (read more...)

awwilcox: "I believe this book would be an excellent choice for a study on ecosystems, animals, camouflaging, and habitats." (read more...)