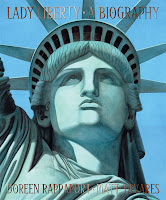 Lady Liberty: A Biography written by Doreen Rappaport and illustrated by Matt Tavares is an absolutely stunning account of the building of the statue, from concept to creation. The story is told in lyrical vignettes from the point of view of many involved in the statue's creation, including:
The book begins with a vignette by Doreen Rappaport, telling her grandfather's story as he fled Lativa and arrived in the United States. She imagines what it was like as his ship approached New York:

"Then early one morning, shouts of
'The Lady! The Lady!' awakened him.
He raced up to the deck.
The ship was pulling into New York,
and there was Lady Liberty greeting them all.

Arms reached out as if to caress her.
People lifted babies so they could see her.
Tears ran down by grandfather's face.
People around him were crying, too.
And then a wave of cheering and hugging
swept over the ship. "

The book then moves back to 1865 in a French parlor. Edouard de Laboulaye shares his dream of giving a monument to America in celebration of her 100 years of independence. Auguste Bartholdi is in the room, and the next vignette belongs to him. We see his studio, working on a clay sculpture of a lady draped in robes holding a torch. Bartholdi reveals the location he has chosen for the statue and compares it to the wonder of the Great Pyramid of Egypt, Zeus at Olympia, and more. The book continues through the 20 years it took to build the statue and ends with Doreen Rappaport sharing quotes from those who arrived in New York and saw the magnificent Lady Liberty for the first time. 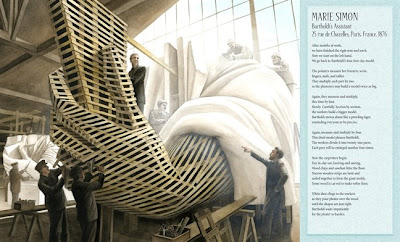 A final section in the back of the book lists the statue's astounding dimensions, a time line of important events, notes from both the author and illustrator, and sources where readers can get more information about Lady Liberty.

This powerful story is enhanced by absolutely stunning lifelike illustrations. I kept forgetting that I was looking at illustrations and not actual photographs. Rendered in watercolor, ink, and pencil, Tavares' highly detailed illustrations feature deep, rich tones that take you back to the past. A fold out spread near the end of the books shows the stunning lady in all her glory as she is revealed to the world.

I cannot recommend this book enough to social studies teachers, to parents, to children who want a new perspective on the story of one of the most powerful ladies in the world.

The Reading Zone: "A stunning book, I can’t wait to share this with my classes!" (Read more...)

Becky's Book Reviews: "Lady Liberty is both beautifully written and beautifully illustrated. Though I must admit it was the illustrations that first caught my eye. I love Tavares' style. The colors. The tones. There's just something so rich, so expressive. It works for me really really well." (Read more...)

Seven Impossible Things Before Breakfast: "An impressive biography, showing how the visions and hopes and sweat of many—including many immigrants to the States—gave birth to one of the world’s most iconic statues." (read more...)


Get more great nonfiction recommendations at Picture Book of the Day!