Rabbit and Squirrel: A Tale of War and Peas by Kara LaReau, illustrated by Scott Magoon 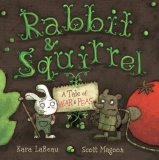 
Have you ever jumped to a conclusion and confronted someone only to find out later that it wasn't the person's fault at all? But by the time you realized it, your pride prevented you from admitting you were wrong? Nah, me either. In actuality, one such incident that occurred when I was a teenager resulted in my sister pushing me into the bathtub and turning on the shower.

The author and illustrator of Ugly Fish have joined forces again to bring us a story that reveals the ugly consequences of what may happen when you make incorrect assumptions. A rabbit named Rabbit and a squirrel named Squirrel live across the way from each other. They are frequently outside tending to their gardens but have never made an effort to speak to each other until one dreadful day when Rabbit wakes up to find that someone had taken carrots and lettuce from her garden. Immediately assuming it was Squirrel, she barges in on him in his whitey tighties, threatening him to stay away from her garden, or else. The next day, Squirrel awakes to find sweet peas and tomatoes missing from his garden. After declarations of war, name calling, tomato throwing, and a destroyed house, they find out who the real culprit is. But have they gone to far to make amends? Can they forgive each other?

Through this engaging and humorous story, Kara LaReau manages to make an excellent point without ever sounding preachy or condescending. While Rabbit and Squirrel's antics are funny, children learn what can happen if you can't keep your emotions in check and automatically jump to conclusions. Ms. LaReau also makes her point even more clear by not wrapping the book up in a pretty little bow. Instead, readers are left with uncertainty and a small glimmer of hope. 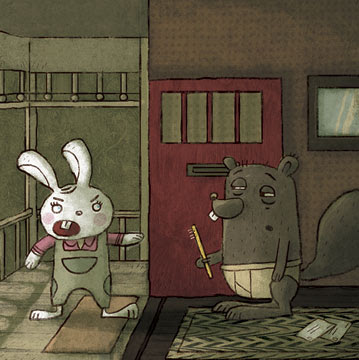 And check out the illustration below of the warring Rabbit & Squirrel's deranged faces! Anger can turn even the most civil people into raving lunatics, and Magoon does an exceptional job of showing this progression through his illustrations. 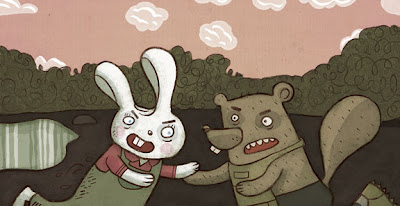 Rabbit & Squirrel: A Tale of War and Peas is storytelling at its finest and a sure discussion starter. Highly recommended.

*A special thanks to Kara LaReau for providing the images and for her patience and perseverance through a number of technical difficulties.

Three Silly Chicks: "LaReau's smart text is perfectly balanced with Magoon's nuanced illustrations which reveal Rabbit's and Squirrel's surprising breadth of emotion. If you've ever wondered what a vengeful rabbit or a suspicious squirrel might look like, this is the book for you." (Read more...)

Seven Impossible Things Before Breakfast: "This is not a tidy, morally prescriptive tale about fighting and bad manners for young children (but then if you know LaReau’s books, you know she has more respect for children than that)." (Read more...)

A Year of Reading: "There's great power in a cautionary tale such as this one. It gives our children a way to distance themselves from their disagreements and think about the problem in terms of Rabbits and Squirrels." (Read more...)

A Fuse #8 Production: "If you’ve had your fill of garden pest picture books and you feel like you want a break, just give this book a chance before you throw in the trowel. Sometimes war is just a series of miscommunications and sometimes the two parties are communicating perfectly. This book gives it to you both ways. Smart stuff that’s easy on the eyes." (Read more...)

If you have a review of Rabbit & Squirrel, leave a comment with your link, and I will add it here.
Posted by Unknown at Wednesday, May 07, 2008