Sally and Dave, A Slug Story by Felice Arena 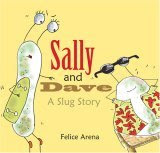 Sally and Dave, a Slug Story by Felice Arena

Sally the slug is the kind of girl…er slug…you love to hate. “She’s sensational at sports. She’s sleek, slim, and simply stunning.” You name it, she can do it superbly from shooting soccer goals to performing spectacular snowboard stunts. Oh, and she’s a little obnoxious in my humble opinion.

Her neighbor, Dave on the other hand is a “common fat slug.” His favorite activities include “sleeping sideways in his own slime…[and] “sidewalk sunbathing in summer.” He’s perfectly happy with his life, until one day, Sally makes a snide and insulting remark. It takes a scary situation and a heroic act for Dave to regain his confidence and for Sally to change her tune about this “slimy slacker” who turns out to be pretty darn “special.”

In addition to the engaging and fast-paced storyline, the cartoonish illustrations are hilarious. In one scene, Dave is in the bathtub sulking about Sally’s comments, a frown on his face, his shoulders hunched, and his googly eyes looking down—a pretty sad scene except “she’s a superfreak…superfreak…” is playing on the radio. Another great scene is of Dave sidewalk sunbathing. He’s wearing sunglasses and a colorful Hawaiian shirt and lounging in a chair with his hands behind his head (do slugs have limbs?). He’s even got a bottle of “Slug Screen” to protect his sensitive slimy skin from the scorching sun.

This book would make a great read aloud for younger children, and definitely cheer anyone up who’s had a particularly grumpy day. If you’re looking for a book that will make your child chuckle,Sally and Dave, a Slug Story would make a perfect choice.

Book Buds Kidlit Reviews: “Sally and Dave: A Slug Story begs to be read aloud. Toddlers to emergent readers will enjoy hearing the hiss of the words as they stream by.”

Jen Robinson’s Book Page: “…This is a highly entertaining title that is sure to please preschoolers. I think that the fact that the main characters are slugs, with the hero a boy slug, will make this book especially pleasing to young boys, though I'm sure girls will like it, too.”