Going Around the Sun: Some Planetary Fun by Marianne Berkes, illustrated by Janeen Mason

Going Around The Sun: Some Planetary Fun by Marianne Berkes, illustrated by Janeen Mason

Do you remember the poem, "Over in the Meadow?"

Over in the meadow,
In the sand in the sun
Lived an old mother toadie
And her little toadie one.

In her new book, Going Around The Sun: Some Planetary Fun, Marianne Berkes has adapted this poem to introduce children to our solar system. Old Mother Toadie becomes Old Mother Sun, and she's trying to get her planets in line. Each stanza of the poem is about one of the planets in the solar system, and underneath the stanza is a short fact about the featured planet.

"Up in outer space
In our sky of pink and blue,
Venus shines a light so bright.
Here is planet number two.


Venus 'sparkles' brilliantly, but it's not a star, it's a planet! "

Pluto even gets a mention and a little chastising from Mother Sun for not staying in line, but it's made clear that Pluto is no longer considered a planet, but a "dwarf planet." This is nice because I haven't seen any up-to-date books for kids that reflect this change.

Janeen Mason's brilliant and detailed mixed-media illustrations are just as engaging as the text, from the the splendid illustration of Saturn and its rings to the picture of all of the planets lined up and drawn to scale at the end: 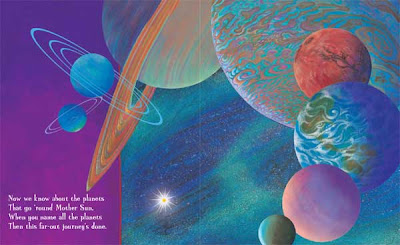 This is a great page with lots of learning opportunities. You could have children name the planets in order and introduce cardinal and ordinal numbers. I can also see this page being used to introduce comparisons, such as "Jupiter is the biggest planet", and "Earth is bigger than Venus." You could even have kids identify colors.

The end of the book gives more information about the solar system and the planet as well as additional ideas for supplemental activities and a list of resources from the author and illustrator.

This book would make an excellent addition to any elementary classroom or home library and would also make a great read aloud.