So, I'm participating in Mailbox Monday for the first time ever. Not sure why it took me so long because I love reading other Mailbox Monday posts to see what books other bloggers have received.

What is Mailbox Monday? It's a weekly round-up of books people have received in the mail during the previous week. Started by The Printed Page, it's now hosted by other blogs, alternating monthly. This month, She Reads and Reads is hosting.

This week, I received a lot of Middle Grade and Young Adult books and one picture book. 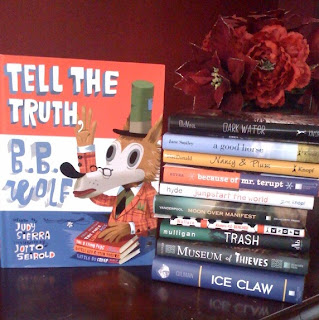 The picture book is Tell the Truth, B.B. Wolf by Judy Sierra, illustrated by J. Otto Siebold (Knopf, 2010). It's a follow up to their 2007 hit Mind Your Manners, B.B. Wolf. In this book, B.B. Wolf (a.k.a. Big Bad Wolf) faces skepticism from some favorite storybook characters when he starts telling HIS version of the Three Little Pigs. To make up for blowing the pigs' houses down, he decides to do a good deed. It's super cute.

Now the only challenge is deciding which one to read first!

Books mentioned in this post were received as review copies from the publishers. The links in this post are affiliate links. With every purchase you make through clicking on these links, you are helping support The Well-Read Child.